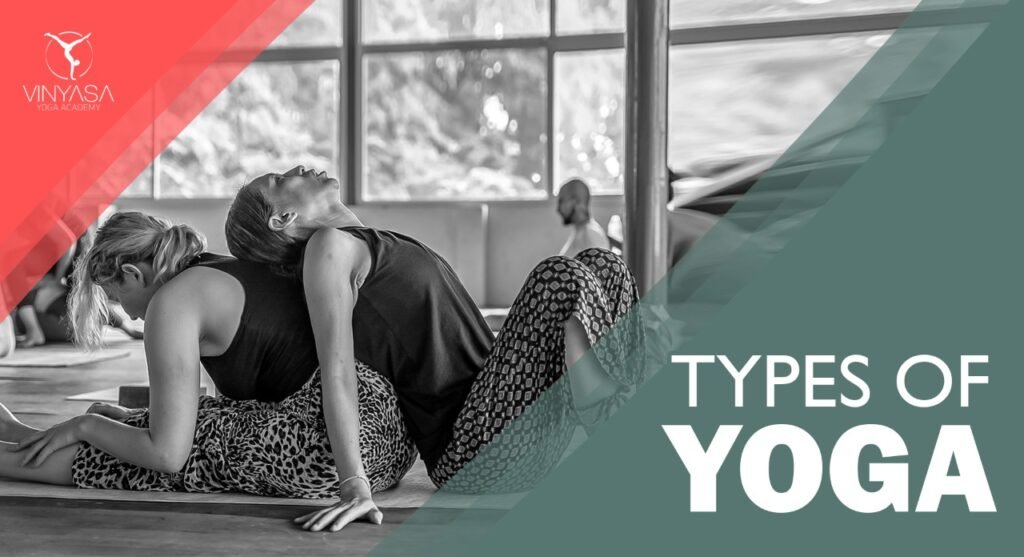 Before beginning with the article, let’s read about yoga first. If you thought that yoga was all about bending and twisting your body in odd shapes, then, it’s time to rethink. As yoga is much more than that. In very simple words, giving care to your body, mind and breath is known as yoga.

“Yoga” is a word derived from the Sanskrit word, ‘yuj’ which stands for ‘to unite or integrate’. Yoga is a 5,000-year-old Indian body of knowledge. It is all about harmonising the body with the mind and breathing through the means of various pranayama, yoga asanas and meditation.

Here are the 7 major types of yoga:

Ashtanga yoga shares a few elements with vinyasa yoga, such as the flowing movement and breathing style. However,  classes of vinyasa yoga are more varied, whereas ashtanga has a set sequence of poses that you can not deviate from.

Ashtanga yoga classes also tend to place a significant emphasis on meditation, which means it can have numerous benefits for your mental and physical health.

Vinyasa stands for “to place in a special way” and, in this case, yoga postures. Vinyasa yoga is often considered as the most athletic yoga style. It was adapted from ashtanga yoga in the 1980s. Various types of yoga can also be considered vinyasa flows such as ashtanga, power yoga, and prana.

Jnana Yoga is the process of converting intellectual knowledge into practical wisdom. And, it is a discovery of human dharma in relation to nature and the universe. It is described by tradition as a means to obtain the highest meditative state and inner knowledge.

The literal meaning of “jnana” is ‘knowledge’, but in the context of yoga it stands for the process of meditative awareness which leads to illuminative wisdom. It is not a method by which we try to find rational answers to eternal questions, rather it is a part of meditation leading to self-enquiry and self-realisation.

The Sanskrit word “hatha” is an umbrella term for all physical poses of yoga. In the West, hatha yoga simply refers to all the other styles of yoga such as ashtanga, Iyengar, etc. that are grounded in a physical practice. However, there are other branches of yoga such as kriya, raja, and karma yoga that are separate from the physical-based yoga practice. The physical-based yoga is the most popular and has numerous styles.

Hatha yoga poses can be performed while standing, sitting, or lying down. Since you hold these

poses for longer periods, it can facilitate your build strength and improve balance and posture.

The Kundalini Yoga is concerned with awakening of the psychic centers or chakras, which exists in every individual. There are six major chakras in human beings.

The mind is made up of distinct subtle layers, each of these layers progressively are related to the higher levels of consciousnesses , and each of these levels are associated with the different chakra or psychic center located throughout the psychic body. There are no other chakras apart from the six main, which are associated with planes below the human level. In all we have chakras that connect us to animal levels of mind, to the instinctive realms of being or to the sublime heights of consciousness.

In Kundalini Yoga, higher-level chakras are awakened and also the activities associated with these higher psychic centers. The primary method of awakening involves deep concentration on these chakras and forcing their arousal. Moreover, Asanas, pranayama, mudra and bandha and other forms of Yoga such as Mantra Yoga are used as well to stimulate the awakening.

The Iyengar yoga was founded by B.K.S. Iyengar. This yoga focuses on alignment as well as detailed and precise movements. In an Iyengar class, you will perform a variety of postures while controlling your breath.

Iyengar yoga is another slow style of yoga, where you hold poses for longer periods, however it also includes physical props such as yoga blocks and straps. It can be a great option if you don’t have full mobility in your body as yoga props can help you get into proper alignment.

Hot yoga is another emerging yoga style with a more rigid sequence. In hot yoga classes, you will generally do two sets involving a series of 26 poses in 104 °F heat.

Hot yoga is sometimes known as Bikram yoga, but many studios have moved away from using this name after criminal allegations have been raised about Bikram Choudhury, the founder of hot yoga.

While the heat can be intimidating, you will feel that it offers a mood boost, and may often feel the positive effects of the increased sweating of this practice. The hot temperature may also help you to loosen muscles and improve flexibility.

Yoga is a trend that has been flourishing for several years; rather this has become a trendsetter in maintaining both physical and mental well-being. The sole purpose of yoga is to build strength, awareness and harmony in both the mind and the body.

While there are over 100 different types, or schools, of yoga, most sessions typically include breathing exercises, meditation, and assuming postures ( asana or poses) that stretch and flex various muscle groups.

Since there are so many different kinds of yoga practices, it is possible for anyone to start. The main agenda is to explore your limits, not strive for some pretzel-like perfection. It is really a great way to get in tune with your body and your inner self.

If you are keen to learn more about yoga, its type and it’s practice, you can visit your website.

Stay healthy, stay strong and get the best out of life!